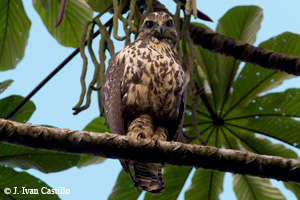 On December 16, 2017, seven dedicated volunteers set out at sunrise to participate in the annual Christmas Bird Count (CBC) at Selva Verde Lodge. The group, led by José Iván castillo Gómez, and six other naturalist guides or guides in training, were tasked with identifying and recording bird species at Selva Verde Reserve. The 11-hour long expedition yielded inspiring results: 168 different species were spotted on the reserve. 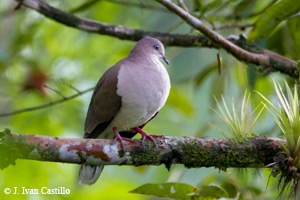 THE CHRISTMAS BIRD COUNT AND WHY IT’S IMPORTANT

The Christmas Bird Count is a census of birds throughout the Western Hemisphere. The count takes place annually, each winter, and is performed by volunteer birdwatchers, typically between the dates of December 14 – January 5. It’s directed by the Audubon Society, but overall is a collaborative effort that brings many conservation-minded organizations and individuals together for a common cause: protection of bird species and their habitats. In Costa Rica, La Selva Biological Station spearheads the yearly event. The data collected from the Christmas Bird Count provides valuable insight into the long-term health and standing of bird populations in North America. Conservation organizations can in turn use these finding to develop strategies for future protection of birds and their homes.

The history of the Christmas Bird Count dates back over a hundred years, Christmas Day 1900 to be exact. Prior to this date, hunters took part in a holiday tradition known as the Christmas “Side Hunt,” a competition to see which individual could kill the most game. Ornithologist and member of the newly beginning Audubon Society, proposed a new holiday tradition—a “Christmas Bird Census” that would count birds instead of hunt them. The beginnings of conservation were certainly underway.

Chapman’s proposition was successful and that Christmas Day, Chapman and 27 others conducted 25 bird counts, recording a total of 90 species. More than a century later the tradition lives on, and is thriving; each year tens of thousands of birders venture out, rain or shine, to take part in the “longest-running community bird science project.”

Preliminary results of this year’s count can be reviewed here. 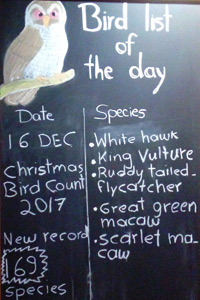 THE RESULTS AT SELVA VERDE

Although still in the early stages, and much analysis is yet to be completed, one piece of evidence is clear: last year’s count yielded 150 different species, while 2017 resulted in 168 different species sightings. There are numerous variables that can account for this increase, and while it may be too early to know definitively what this means, overall the increase is a positive sign. The conservation effort at Selva Verde to provide safe, unspoiled habitats has not gone unnoticed; not by the birds or the people who love them.

If you missed this year’s CBC, you can still be prepared for the next year. Visit Audubon to learn more about the CBC and how to join a CBC Circle.

all photos by J. Ivan Castillo