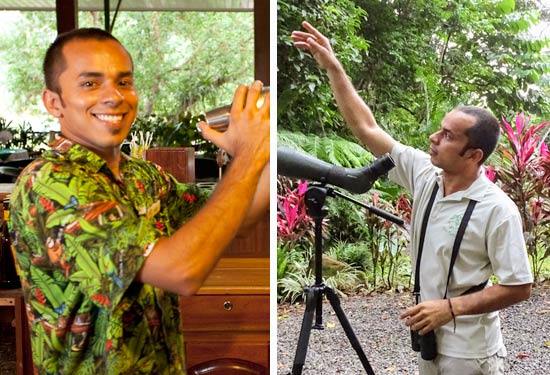 José Iván Castillo Gómez or “Iván,” as many know him, led groups on his last day as Selva Verde’s lead naturalist guide in December 2019. Iván is now officially a national guide and is excited to share his love for Costa Rica with its amazing variety of ecosystems and communities.

Having graduated from high school in Río Frío, Iván started at Selva Verde Lodge in 2003 as a bartender and waiter. Some years later, he obtained his degree in sustainable tourism management while he pursued every opportunity to learn about natural history, especially birds. He took the naturalist guide course offered by La Selva Biological Station, and in 2013, he became the lead naturalist guide at Selva Verde, helping to create a team of guides that can open the eyes of guests from all over the world to the wonders of the tropical rainforest at Selva Verde and the Sarapiquí region.

After 16 wonderful years, the staff at Selva Verde and Holbrook Travel wishes Iván success in his role as a national guide, and Holbrook looks forward to working with him in the capacity of his career.

Selva Verde naturalists Ronald Jiménez Saborío, Randy Gómez Alvarado, Melany Ocón Rojas, and Juan José Umaña will carry on the torch at Selva Verde — look for them during your next visit to the Lodge.

“Selva Verde will always be your home, Iván. We look forward to your visits and following your path as an excellent naturalist national guide.” - Andrea & Giovanna Holbrook