Carlos Alvarado Quesada will be inaugurated this May as Costa Rica’s 48th president. After a lengthy campaign, involving two rounds of final voting, which actually took place on Easter Sunday—the first time in Costa Rica’s history—Alvarado Quesada took the victory over his opponent, Fabricio Alvarado (no relation); an evangelical pastor whose platform was based on a return to tradition and increased religion in government. For many Tico’s Alvarado’s win came as a major relief. The country, known for its “Pura Vida” mentality and commitment to environmental protection/conservation, would potentially face drastic changes if the election had gone the other way. 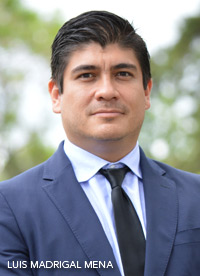 Who is Carlos Alvarado Quesada?

Carlos Alvarado Quesada is a member of the governing party: the Citizens Action Party, a left-leaning, progressive party that encourages citizen involvement in politics. He is also an author, a journalist, a political scientist and a musician who loves rock music. The second of three children in a middle class family, Alvarado grew up in Costa Rica and would eventually go on to study at the University of Costa Rica (UCR). Initially, he majored in journalism but eventually switched to political science, after seeing injustice and inequity firsthand. Alvarado graduated and was awarded a scholarship to study development studies at the University of Sussex, England. Afterward he returned to Costa Rica, and married his high school sweetheart, Claudia Dobles, an architect. Her work took them to Panama where Alvarado wrote the novel “Las Posesiones.” In 2014 he returned to Costa Rica and served as communications coordinator on the campaign for Luis Guillermo Solís (current president). After Solís won Alvarado was appointed as the Minister of Human Development, a position focused on aiding impoverished individuals. Two years later, Alvarado became the Minister of Labor and Social Security, before beginning his 2017 presidential campaign.