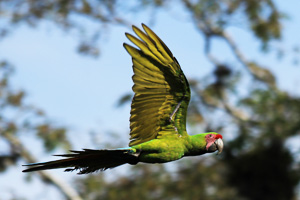 The great green macaw is arguably the most spectacular bird at Selva Verde. At almost 32 inches in total length and weighing close to three pounds, it is the 2nd-largest New World parrot. It is easily recognized by its robust body and long tail. It has an extraordinarily powerful bill and dexterous toes that grasp food items that are being eaten.

Unfortunately, despite its iconic status, the future of the great green macaw in Costa Rica is precarious. In 2006, it was listed as endangered by the International Union for the Conservation of Nature (IUCN), and since then its numbers have continued to decline. At present, it is believed there are no more than 200 in Costa Rica; the breeding population is roughly 35 pairs. Selva Verde is on the edge of the range of the last remaining population in Costa Rica; none of the approximately 20 known active nests are in the Sarapiquí zone, where Selva Verde is located.

But, macaws regularly forage at Selva Verde, especially in the upper forest canopy along the Hill Trail. Great green macaws feed almost exclusively on the almonds of the almendro tree (Dipteryx panamensis). A recent 7-year study in the Sarapiquí area confirms that almendro trees are absolutely critical to the macaws; almonds comprise over 95 percent of their diet. Alternative foods are eaten, but reluctantly.

The diet of this macaw is so specific that researchers confirm foraging macaws exclusively target certain individual mature trees whose almonds are the most nutritious. These key trees are critical to macaw survival.  Chronology of the almond ripening process determines macaw movements, and often the birds move great distances between roosting and foraging sites.

Recent government decrees in Costa Rica have temporarily banned the logging of almendro trees, but illegal tree-cutting continues. Macaws not only depend on almonds for food, but most pairs nest in cavities in mature almendro trees. A recent study shows that one-sixth of mature almendro trees used by nesting macaws were cut down in a 7-year period despite the anti-logging decree. The situation has improved somewhat due to Natural Resources Vigilance Committees.

But, the future of the great green macaw is especially tenuous in the Sarapiquí area where numbers continue to fall. Nonetheless, the birds are still seen fairly regularly at Selva Verde, either foraging in canopy or flying above the trees. Deforestation is the main threat to these macaws; about 95 percent of the original macaw habitat in Costa Rica has disappeared over the last 100 years. According to the Great Green Macaw Research and Conservation Project, “uncontrolled” deforestation, mainly for livestock ranching, is the primary reason for macaw losses.

Up until recently, great green macaw ecology was largely unknown in Costa Rica. But, recent research confirms that 88 percent of all macaw nests are located in mature almendro trees. Studies involving macaws instrumented with transmitters show pairs do not nest in the same cavity more than once, which means that surplus new cavities are needed to ensure future nesting.

Monitoring of nests shows about 65 percent of all young macaws live to be at least one year of age; each nest produces an average of 1.83 offspring. Survival of offspring is enhanced by macaw social behavior; family units comprising parents and offspring remain intact for at least one year and the young birds benefit enormously from extended parental vigilance and care.

Great green macaws can be noisy; they are often heard before they are seen. Vocal repertoires include a variety of squawks, growls and hoarse grating shrieks. Despite their loud flight calls, the birds are usually silent while foraging.

Analysis of vocalizations shows a great deal of individual variation occurs. Macaws within each locality have slightly-different dialects. Calls are often very specific, encoding information with regard to approaching predators. All adult macaws have a rich vocabulary comprising syllables and phrases with distinct meanings.

In an attempt to protect great green macaws, Costa Rica is undertaking to establish special habitat reserves in key lowland forested areas; one such are is Maquenque National Park.

Great green macaw nest cavities are located up to 80 feet above the ground. Typically, 2 eggs are laid. Adults rarely breed until they are at least 6 years of age; the normal life span is about 30 years.

- Robert Alison, PhD
Robert is an avian ecologist and ornithologist based in Victoria, British Columbia. He is a frequent contributor to Field Notes.