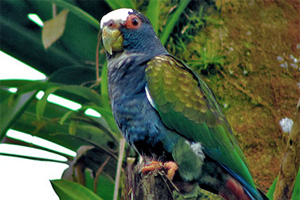 The white-crowned parrot is a small, perky and robust bird with a disproportionately large head.  It is common and widely-distributed in Costa Rica, most often encountered in semi-open agricultural areas with scattered patchy trees. The species is abundant in the Selva Verde vicinity where it is characteristically most active in the early morning and late afternoon.

These parrots are almost entirely arboreal. They virtually never forage on the ground. Their main diet comprises the seeds, nuts and fruit of palms, Inga and Erythrina, sometimes damaging orchard fruit or corn.

White-crowned parrots are extremely social birds, spending most of their time in flocks with 30-50 members. Each flock is a highly-organized social unit, lacking any specific flock leader, but having a complicated structure shaped by the necessity to detect and avoid predators.

One key element of flock social behavior is the posting of sentinels to scan for potential danger. Each flock is a social entity with mainly unchanging membership; some members have specific roles. Before venturing into an area, for foraging or roosting, 1-4 scouts are sent out from a flock to fly about and look for possible threats. As soon as the scouts indicate the coast is clear, the entire flock flies in and perches on the uppermost branches of a tall tree. There, the birds satisfy themselves there is no danger present. Then a sentinel is positioned atop a very tall tree with a view of the entire area. Once the sentinel has been positioned, the flock descends to lower foliage to feed or roost.

Foraging is a silent activity. It involves deliberate movement among branches with minimal fluttering or excessive motions that might betray the birds to the keen eyes of predators, especially raptors.

In the Selva Verde area, stately oil palms are key parrot foraging sites. The first flocks appear just about sunrise and foraging is most intense over the course of the next hour or so. Lone sentinels scan for danger, foregoing their own feeding, until they are relieved by a replacement sentinel. Under the parrot ’sentinel alert system’, no sentinel ever abandons its post until a replacement is in position.

In some cases, the changing of sentinels involves some mutual communication. The replacement flies up and the former sentinel flies down to forage. So far, research has failed to confirm whether or not each flock has specially designated sentinels, a few flock members that regularly perform that function. But, research confirms that sentinel behavior is an effective way for parrots to better detect approaching predators.

These parrots nest in tree cavities, especially hollows in mature palms. Up to six eggs are laid, mostly January to April. During the breeding season, males aggressively defend their nests and their partners, often flying menacingly toward intruders.

In Costa Rica, white-crowned parrots are often kept as household pets on account of their intelligence and interesting behavior.

It is easy to recognize these parrots in flight because their wing stokes are much more exaggerated than those of other parrots of their size.

- Robert Alison, PhD
Robert is an avian ecologist and ornithologist based in Victoria, British Columbia. He is a frequent contributor to Field Notes