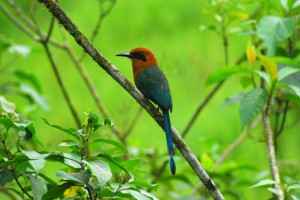 The rufous motmot (Baryphthengus martii) is the largest of six motmot species in Costa Rica; three others occur elsewhere. Motmots typically have short broad beaks, often decurved, and striking plumage coloration. There is no significant sexual dimorphism.  All motmots in Costa Rica  have two elongated central tail feathers; racket-tipped because loosely-attached barbs upshaft fall off, leaving much of the shaft itself bare.

These are mainly solitary birds, sometimes occurring in pairs, which usually perch inconspicuously in shade, with the tail swinging frequently like a pendulum. Foraging involves aerial sallying from a perch, capturing insects and plucking fruit from foliage.

The rufous motmot is an important seed-disperser. Studies confirm the fruit-digestion process is so rapid that fruit seeds are excreted intact and scattered on the forest floor, often far from the parent fruit trees. Forest regeneration thereby ensues.
These motmots sometimes eat poison dart frogs, seemingly immune to their deadly toxins; one poison dart from carries enough lethal toxin to kill ten humans. Researchers have documented that pair members sometimes capture poison dart frogs and feed them to each other.

Rufous motmots are widely distributed from Honduras to Ecuador and Brazil. According to BirdLife International, the species is  of “least” conservation concern, occupying a total range of over one million square miles. This species adapts readily to local conditions, a trait that has permitted it to thrive under a variety of environmental circumstances, even in close proximity to humans.
These are large (18 inches long) and robust birds, usually frequenting humid forests and shady thickets, often occurring along forest edges. They are very vocal; their melodious repertoires include a variety of rolling ‘hoots’.

Nesting takes place in a chamber at the end of a long (12-16 feet) tunnel excavated by both parents, usually in a stream bank or gravel pit wall. Both sexes alternately incubate the 2-5 eggs for 18-22 days. The young fledge in 24-31 days.
Motmots are typically quite shy and owing to their characteristic aloofness, patience is often needed to locate them, especially in thick vegetation. They sometimes frequent the margins of a small creek that flows through the Selva Verde property, or along the Sarapiqui River. Despite their bright coloration, they are remarkably difficult to detect.

Taxonomists are not agreed with regard to this species; some believe it is conspecific with the rufous-capped motmot (B. ruficapillus).

- Robert Alison, PhD
Robert is an avian ecologist and ornithologist based in Victoria, British Columbia.  He is a frequent contributor to Field Notes.